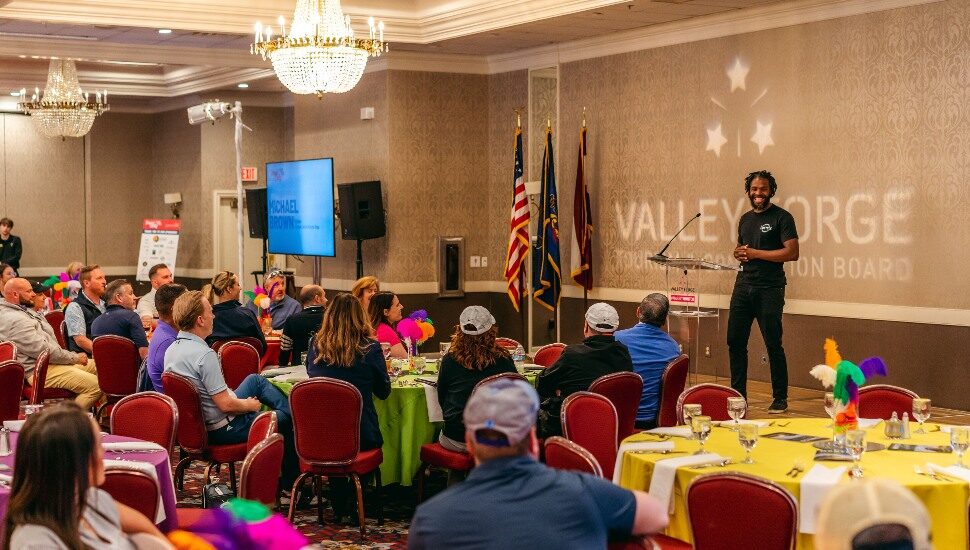 Valley Forge Tourism celebrated Montgomery County, Pennsylvania as a premiere tourism destination during the 6th annual Travel Rally on May 9, 2022, which was held during National Travel & Tourism Week.

Titled “The Future of Travel,” guests and media who attended the special event were the first to learn of several new initiatives coming to the region, including the launch of the first ever Montco Jazz Fest, plus the return of Advocates Professional Golf Association Tour to Montgomery County in Fall 2022.

“We believe travel’s got a pretty bright future here in Montgomery County, Pennsylvania,” noted Mike Bowman, President & CEO of the Valley Forge Tourism & Convention Board. “That’s because historically, tourism has been a huge, key positive economic driver in Montco contributing more than $1.65 billion, and more than 25,000 jobs. We know travel will continue to have a positive impact here. Travel allows us to emotionally connect with each other, which we need now more than ever.”

During the event, Valley Forge Tourism announced the launch of their first ever Montco Jazz Fest, which will be incorporated in the organization’s second annual Arts Montco Week, September 16-25, 2022. The new festival will feature performances at iconic Montgomery County venues.

Also announced was the Valley Forge engagement of THE AMERICAN REVOLUTION SHOW, performing at Washington Memorial Chapel from June 18-26, 2022.  The highly-acclaimed, Italian Renaissance-style show has performed at other noted venues, such as the Kennedy Center in Washington, D.C. and Lincoln Center in New York.

Advocates Professional Golf Association Tour will return to Montgomery County in Fall 2022. The return of the prestigious golf tour, which includes 22 premiere locations around the country including Pebble Beach, aligns Montgomery County with other top golf destinations.  Cole Smith, Executive Director of the APGA, was present to celebrate the announcement.

Valley Forge Tourism also shared their Summer 2022 video media campaign, which positions Montco’s strengths as the ultimate family destination. Thanks to consumer research and trend monitoring, along with Valley Forge’s ongoing partnership with Zartico (a company that helps track visitor information to provide details on where visitors are coming from, places they’re visiting while they’re in the region, how long they’re staying, and what they’re spending), the organization will target their family-focused messaging to markets in Philadelphia, Washington, D.C., Boston, Baltimore, Hartford, and Virginia.

Additionally, the second annual Crave Montco Month will return in July, a robust, four-week campaign to highlight Montgomery County’s over 1,850 restaurants and Montco Makers. The promotion will include social media influencer takeovers, a kick-off press junket, pop-up events, and celebrity chef appearances throughout the 31 days.

Other continuing Valley Forge Tourism initiatives highlighted during the Travel Rally include: